After so many years of blaming myself for everything that got ruined and everyone who got hurt directly or indirectly from the abuse I endured, I have finally realized that I was abused, and it wasn’t my fault. At the same time, in my clearer perspective it remains undeniable that as a result of my not realizing and dealing with the reality of what happened to me, I behaved in a way that hurt people. It’s a hard thing to grapple with mentally when I have been so willing to hate and scrutinize myself for things I was helpless to change, knowing that, in fact, there are apologies I do owe. It becomes easy to spiral back into a place of self-blame. On the flip side, it becomes easy to worry that by forgiving myself I am lying to myself in order to exculpate myself. While I believe over the years I have repented and taken responsibility personally to all the people I believe I owed it to, I think owning what I’ve done is something I’d like to do right here, right now – as well as taking inventory on what I do not take responsibility for. I owe it to myself to try to finally let go of what has plagued me for so long.

I will not sugarcoat it; I became a toxic and sometimes verbally abusive and manipulative person myself in the aftermath of my abuse. I was so angry and frustrated and confused and alone, and not understanding these feelings, I exploded on everyone. My sister once told me she felt the peak of my disdain for her was around 2012, and this was surprising to me because I hadn’t felt that way at all. What she perceived as the worst of our rocky relationship in childhood was actually what became my baseline towards everyone in my life.

I would throw my phone angrily. I would act out, storm off, make a scene, and never apologize because I felt everyone was out to hurt me, and I felt they were successful. I once got one of my friends to throw food in another friend’s face because that friend had very accidentally let my cat get out in a snowstorm, and I am so disgusted at myself for this. I would yell and scream at the one person in my life who was really trying to understand, and no matter what they did to try to help, it would just make me angry, and I would blame them, and I let them continue to try to live up to my ever-changing expectations, only to let them know how they have let me down. All the while, I told them I loved them, because I did, but I was selfish and unwilling to recognize that they were not the enemy nor were they responsible for repairing the damage the enemy had done.

I was rude and inhumane towards everyone I loved. I cared more about how much food they were eating in comparison to me than I cared about their feelings and what they might be going through. And if I heard that they were saying things about me behind my back, I got angrier but did nothing to try to mend the relationships.

I would use the lunch money I kept receiving from my mom to go to the mall and buy new clothes or to Smoothie King to buy new laxatives, and I had little room for remorse.

When one of my closest friends had finally had enough of me but, understandably, didn’t want to deal with the backlash of letting me know, I showed up at their house in a frightfully agitated state, called them a few too many times in a row, and I’m sure sent some terrible text messages that I’m so very thankful not to have to look back on.

I was not a consistently good friend to anyone during this time, and eventually I pushed almost everyone away, and eventually I had two good years of near total isolation that I needed to reset and calm down and begin my apologies that would go on almost to this day.

I’m putting it out in the open (obviously this is not every single thing I’ve done wrong) because I think I need to be totally honest in order to forgive myself for everything, including the despicable things that I’ve done. I think I need to do this to release the shame of who I became and to allow myself to realize that I’m not that person anymore. I have messed up so much, I have lost some of the truest friends I had the pleasure of having for the short time I did, and I will never get them back. I’ve paid for what I’ve done in shame and the years of pain I’ve continued to have while watching myself become just a part of these people’s pasts.

And in saying this, in forgiving myself, I am also ready to release the guilt I’ve held onto for so long for things that I did not control.

I did not sleep with someone’s boyfriend. I did not betray his girlfriend. I am not a whore or a slut. I am not a cheater. I am not untrustworthy. I am not a homewrecker. I am not a flirt. I did not ask for this. I did not want this. Someone’s boyfriend raped me. He betrayed his girlfriend. He is a cheater. He is untrustworthy. He ruined his relationship. He is a flirt. He did this. And while I am and always have been sorry that this happened, I am not the one who can apologize for it. And oh my god, I have never let myself say so. I have believed I deserved to be hated by her and her friends for this, and every single time I perceived they were nice to me after they knew what happened I felt so guilty and so grateful they still spoke to me and so unworthy for all these years, every single time.

Every single time I saw them I would get a feeling that they do hate me, and it brought my shame right to the surface as if it were brand new, but no one ever said anything to my face, so I told myself it was in my head and that I was paranoid. I felt crazy and insecure and confused. And finally I see that whether they hate me or not is none of my business, and if they dislike me because they think I’m the tramp I felt like for so long, they’re wrong, and that’s okay, because finally I know who I am, and I know who the bad guy is, and right here for the first fucking time I’m going to say that it’s not me. It’s not an excuse. I have done a lot wrong that I wish I hadn’t done, said things I would die to take back, but this one was on him.

So here it is. I am sorry for becoming a hurtful and mean person. I never meant to be. I’m sorry for misdirecting my anger and pain at all the wrong people and causing them to suffer, too. It’s been an impossible task to try to forgive myself, but I’m doing my best, and I hope that all who I have hurt can forgive me, too. 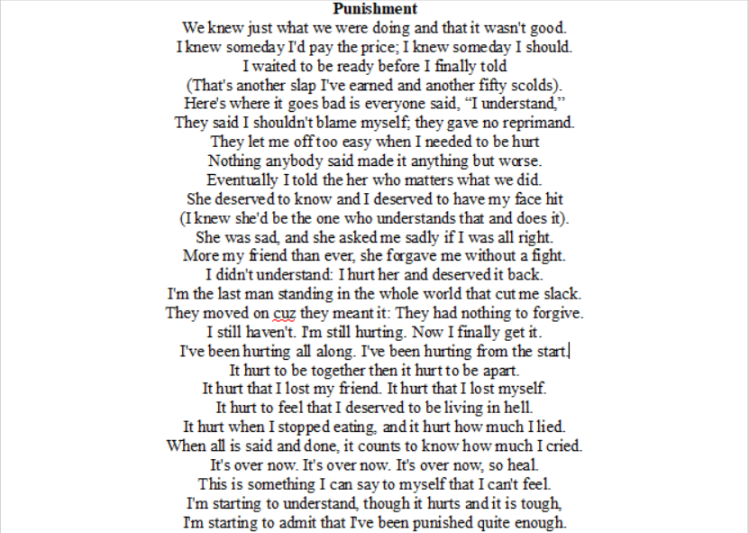