I am haunted not only by the memories of what my rapist did to me but also by the fear of him doing this to others, the fear that there are more victims of his out there who have either chosen to stay silent or who he has managed to convince, as he did with me for so long, that he did nothing wrong. I don’t know what he is doing now, and I hope with all of my heart that he has stopped abusing women. But I can’t know that nor can I wait any longer for justice to be served in the ways I have tried to serve it. I feel I have tried everything.

I reported him to the police. He knows this because the police called him. He also knows that he was not prosecuted. He knows he got away with raping me. To be absolutely sure nothing would come out of this criminally, I met with the prosecutor again this year, and they again confirmed that although they believe I was sexually assaulted, they don’t believe they can prove it to the necessary legal standard.

Shortly after I learned he would not be prosecuted, I began to look into suing him in civil court, which I have been trying to do. My lawsuit against him was thrown out twice at the preliminary stage because of legal technicalities. I am hopeful that more will come from this, but I’ve been working on it for over a year. I can no longer sit on his identity for a small hope that in who knows how many more months or years he might finally face consequences for his actions. I have this image in my head of finding out he has hurt another person in the years I have kept his identity concealed. I’d forever regret not naming him if doing so could stop any more women from going through what I did.

What I want is for anyone out there who he has abused, especially anyone who because of his manipulation is stuck in doubt and confusion and unable to identify what he did to them as his fault and not their own, to know the truth about him. What I want is for anyone who is thinking about becoming involved with him to be able to make an informed decision. It’s not for me to say what he will do in the future, but I can say that this man is a rapist. I feel I need to say that.

My rapist’s name is Avery Peterson. Avery R. Peterson is from Rumson, NJ. He attended University of New Haven from 2012 to 2013 and Ramapo College of New Jersey thereafter until 2017.

But before he went to college, back in our junior year at Rumson-Fair Haven Regional High School, on March 6, 2011, after an extended period of pushing my boundaries ever so slowly, under the guise of friendship and trust and with careful exploitation of my sexual inexperience and low self-esteem, Avery raped me.

Despite his undeniable knowledge of my virginity, despite my never attempting to have sex with my very recent ex-boyfriend, despite his being in a relationship, despite my never expressing interest in having sex with him, he made no attempts to get my consent. If there were any questions about whether or not he had it, as he attempted to penetrate my vagina with his penis, my body had stiffened and my vagina was clenching in such a way that made penetration impossible and the attempt of it excruciatingly painful. He was not dissuaded by this obstacle, nor was he turned off by my complete and utter stillness. He continued to try to force himself inside of me. He turned me onto my back, placed me into the center of my bed, and still continued his efforts to get inside of me. I continually closed my legs. He instructed me to keep them apart. I did not listen; I continued to try to keep my legs together. He grabbed my ankles, spread them apart, and held them down. Eventually, he decided to retrieve the condom he apparently had in his wallet, hoping its lubrication would assist in circumventing my body’s resistance. It was not enough immediately, but eventually he was able to get inside of me.

He was no stranger. He had no weapon. Avery Peterson was my friend. I could not fathom that he would rape me. I naively trusted him when he explained that the intercourse had been painful because he was “stretching” me. I believed him when he said he shared the feelings of guilt and shame I experienced, so I believed it was normal to feel the way I did. He skillfully balanced his mistreatment of me sexually, physically, and emotionally and the justification thereof. He used his power over me to isolate me from my loved ones. For years he continued to distort my perception of his actions to keep me from identifying them as rape and him as a rapist. It took too long, but now I know.

If you’re reading this and you have had an experience with him that wasn’t quite right, if you doubt everything you feel because of the ways he confused you, if he has harmed you, if you’re scared to come forward, you are not alone, and I believe you. 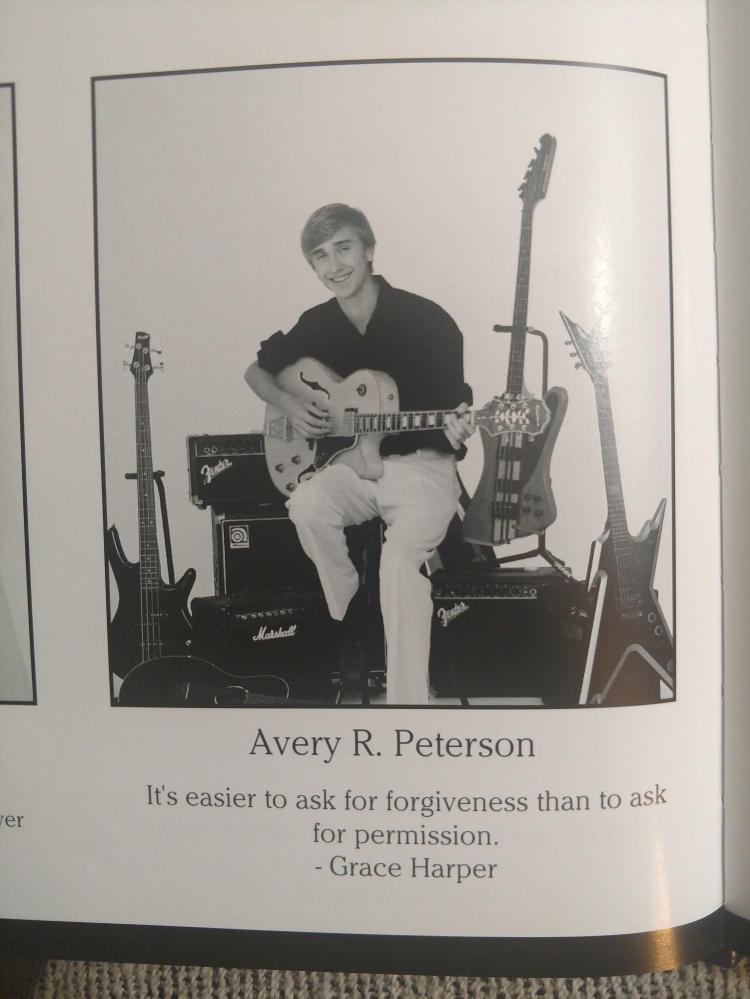